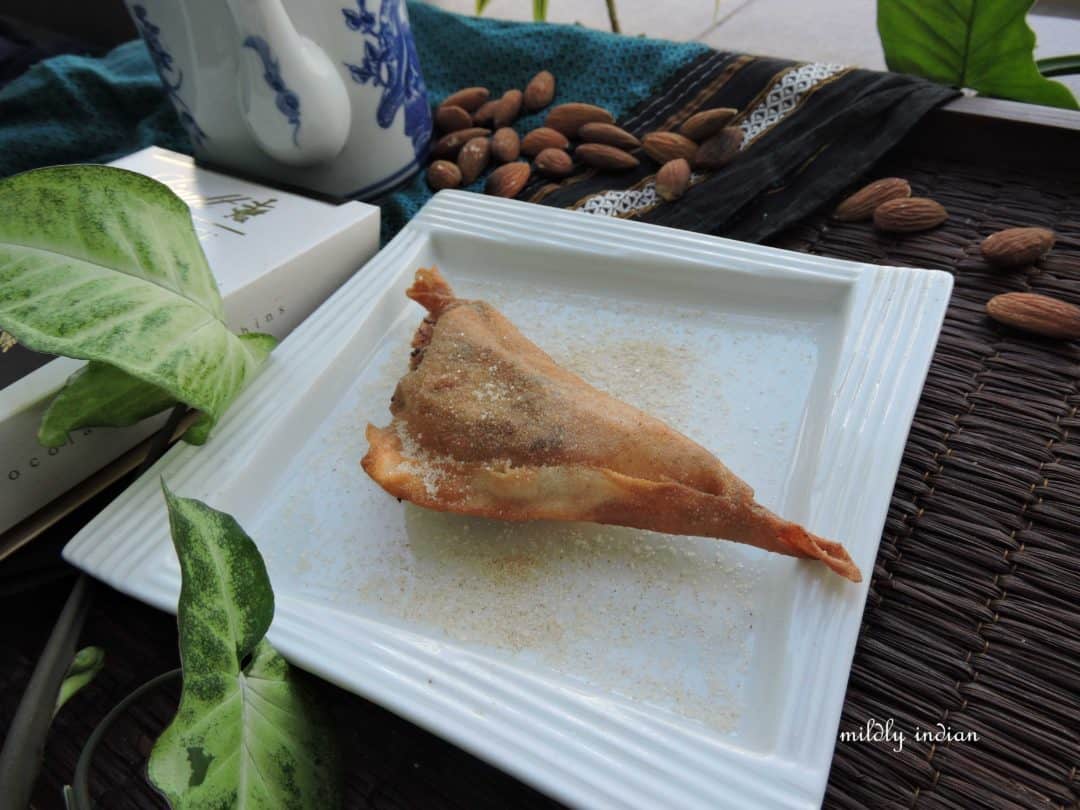 Views: 3,725
What can be more satisfying that oooey  gooey chocolate in a crispy  crunchy exterior… Yes,  I am trying to get my sometimes lazy teen to do a exotic one for his little sister for rakshabandan.. A crispy chocolate wonton filled with nuts,dates  and all things nice.
Rakshabandan a idealistic festival where the brother pledges his undying support  to his sister.
Well!!
being an only child.. I really have not celebrated this festival. Neither did this go very well following my marriage. Still am not a slicker for the customs but feel my kids can show a tiny emotional connection to their never ending  sibling squabbles. Hence we designed friendly fusion to cater to our indulgent sweet tooth.
My children are such “frenemies” where one will diligently  follow the other to play pranks and are absolute terror when one digs through the other ones books and collections.
Today’s mission was simple.. spend sometime creating something special for each other Aided with a demo, they both were ready to try their luck with filling and frying the wonton — tricy part–melt the chocolate  without getting the oil in.  This was fun and an great learning activity.
Both  of them are so involved in the creation process. Aided by the peace keeper portion of  chocolate we march on today….to celebrate the little joys. We giggled over the chocolate thins, we nibbled the almonds had loads of laughter when some wontons refused to turn over and some open up like a flower…
The recipe is fantastic to eat hot ..with the melting chocolate just plain fun.  Today’s version is deep fried.. So if you are a conscious one.. try baking them. 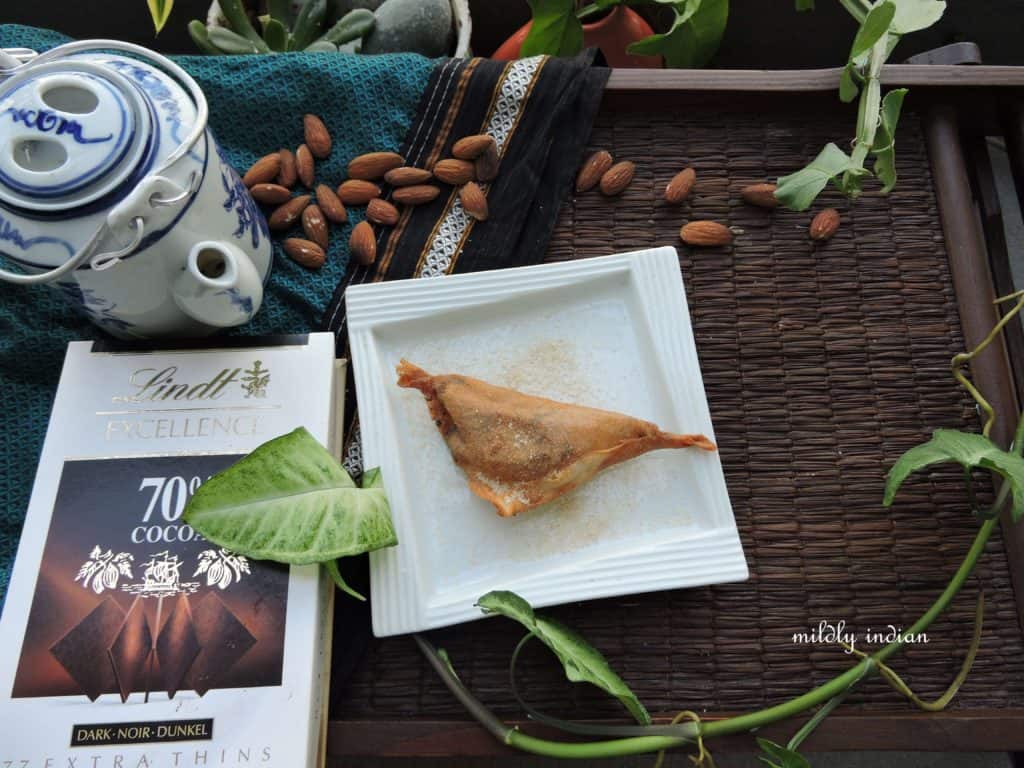 Take a call to see if you can resist.   A hot wonton topped with creamy vanilla ice cream was so delicious.
Scroll down and save the recipe for use forever.  Don’t miss the quick video version to help you with making this recipe

Meanwhile if you are looking for recipes fit for Rakshabandan.. Check out the links below
Cranberry coconut bliss
Palmier cookies
Darwad peda
Kaju katli
ps— This is not an affiliate post for the chocolate company, but I adore these chocolate thins and is the same I have used. 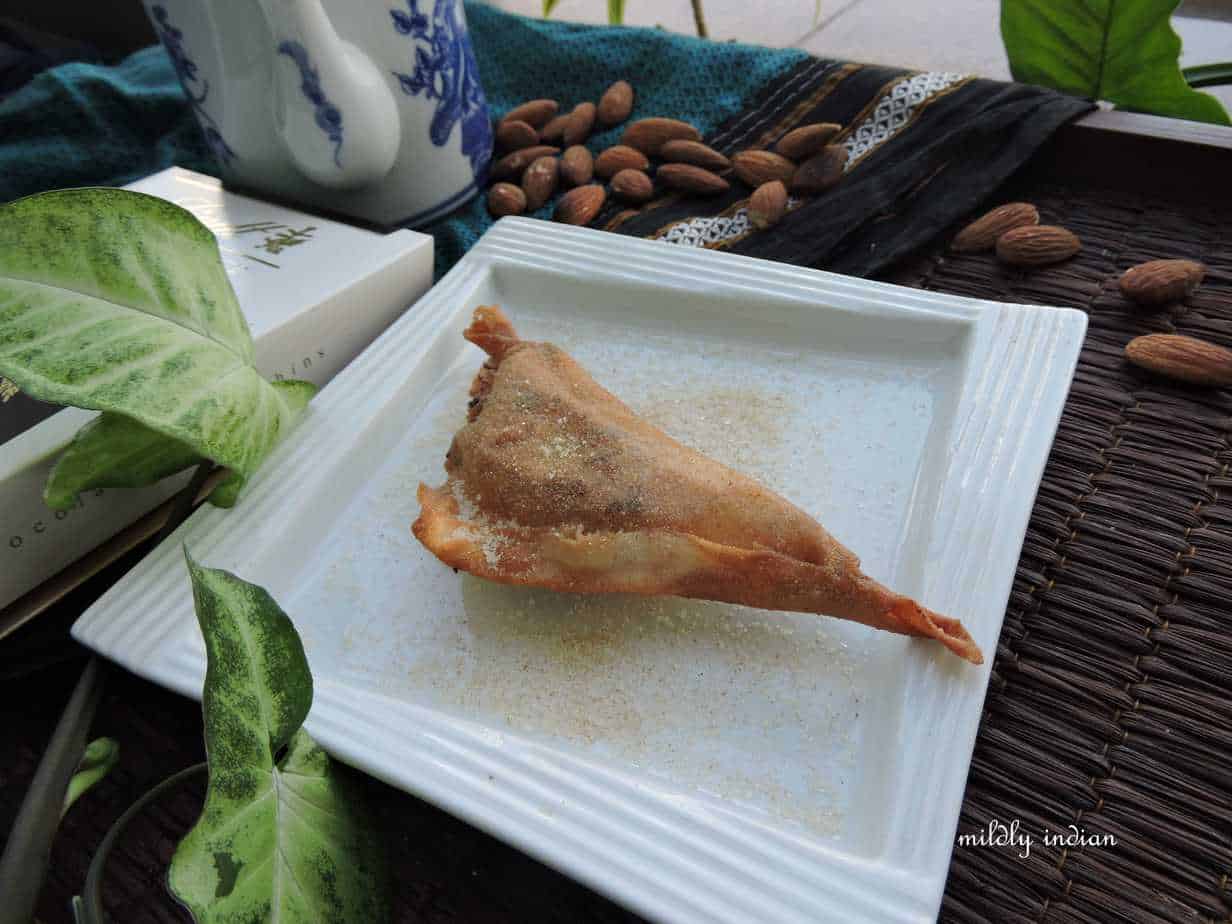 Garnishes- use any one

To check if the oil is ready, use a small piece of another wonton wrapper. fry it and if it turns golden brown well.. you know the temperature of the oil is right. Check the video demo. You could change the chocolate type you use to some chocolate kisses or milk chocolate.
Tried this recipe?Let us know how it was!
0 0 votes
Rating
By mildlyindian 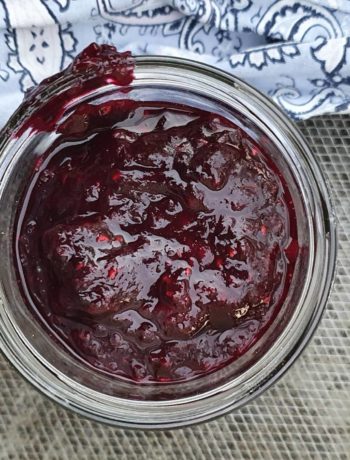 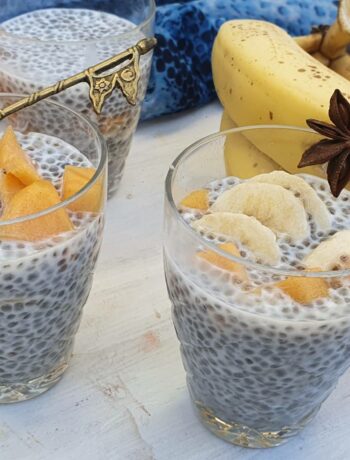 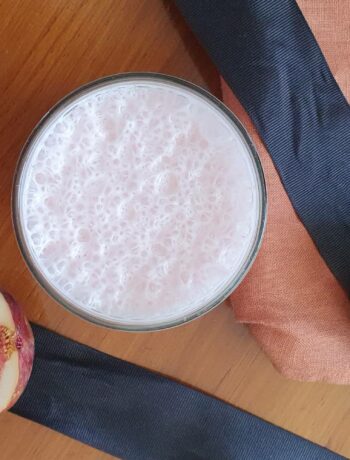 The chocolate wonton are so inviting Seema..I am sure therr will be a blast of flavours in every bite !

Thankyou Poonam, do try it out. It is definitely exciting.

Lovely dessert for kids .. they will love these crispy chocolate wontons.

Chocolate wontons is just prefect to munch without any guilt, too tempting and super crispy wonton there. Lipsmacking here.

These are simply droolicious Seema! What a perfect dessert.

Siblings are often frenemies when young and that is also a part that all of us thoroughly enjoy experiencing though it gets a tad out of control too.. ha ha .. Patience is what kids teach us. I am a teacher to a class of 40 students in a batch and imagine my state yelling, screaming, advising and sometimes peace making between parties. ha ha .. Loved reading your experience. Chocolate wontons look amazing dear and I agree the tricky part about folding, sealing and then frying them praying they dont open up. Glad it worked out beautifully and all… Read more »

I bet these tasted so yummy ! Perfect for parties too! Chocolate lovers heaven.